Broken resolutions and the grace of God 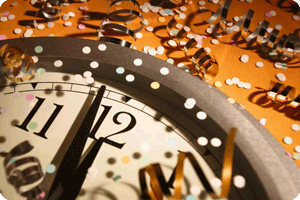 But the reality is that the end of December is usually a reminder of how short I have fallen in the past year. I have not lived up to my resolutions or my goals. I have not become the man, the husband, or the father I wanted to be. But as we come into this new year, I wanted to share a story about another man who did not live up to his resolution: Peter. Peter was one of Jesus’ most devoted and passionate disciples. And when Jesus was about to be arrested, Peter swore that he would never abandon Jesus:

Matthew 26:33-35 - Peter replied, "Even if all fall away on account of you, I never will."  34 "I tell you the truth," Jesus answered, "this very night, before the rooster crows, you will disown me three times."  35 But Peter declared, "Even if I have to die with you, I will never disown you."

But then he denied him three times.

Matthew 26:69-75 - Now Peter was sitting out in the courtyard, and a servant girl came to him. "You also were with Jesus of Galilee," she said.  70 But he denied it before them all. "I don't know what you're talking about," he said.  71 Then he went out to the gateway, where another girl saw him and said to the people there, "This fellow was with Jesus of Nazareth."  72 He denied it again, with an oath: "I don't know the man!"  73 After a little while, those standing there went up to Peter and said, "Surely you are one of them, for your accent gives you away."  74 Then he began to call down curses on himself and he swore to them, "I don't know the man!" Immediately a rooster crowed.  75 Then Peter remembered the word Jesus had spoken: "Before the rooster crows, you will disown me three times." And he went outside and wept bitterly.

Dejected, Peter went back to fishing. But Jesus sought him out in this wonderful story:

John 21:1-19 - Afterward Jesus appeared again to his disciples, by the Sea of Tiberias. It happened this way:  2 Simon Peter, Thomas (called Didymus), Nathanael from Cana in Galilee, the sons of Zebedee, and two other disciples were together.  3 "I'm going out to fish," Simon Peter told them, and they said, "We'll go with you." So they went out and got into the boat, but that night they caught nothing.  4 Early in the morning, Jesus stood on the shore, but the disciples did not realize that it was Jesus.  5 He called out to them, "Friends, haven't you any fish?" "No," they answered.  6 He said, "Throw your net on the right side of the boat and you will find some." When they did, they were unable to haul the net in because of the large number of fish.  7 Then the disciple whom Jesus loved said to Peter, "It is the Lord!" As soon as Simon Peter heard him say, "It is the Lord," he wrapped his outer garment around him (for he had taken it off) and jumped into the water.  8 The other disciples followed in the boat, towing the net full of fish, for they were not far from shore, about a hundred yards.  9 When they landed, they saw a fire of burning coals there with fish on it, and some bread.  10 Jesus said to them, "Bring some of the fish you have just caught."  11 Simon Peter climbed aboard and dragged the net ashore. It was full of large fish, 153, but even with so many the net was not torn.  12 Jesus said to them, "Come and have breakfast." None of the disciples dared ask him, "Who are you?" They knew it was the Lord.  13 Jesus came, took the bread and gave it to them, and did the same with the fish.  14 This was now the third time Jesus appeared to his disciples after he was raised from the dead.  15 When they had finished eating, Jesus said to Simon Peter, "Simon son of John, do you truly love me more than these?" "Yes, Lord," he said, "you know that I love you." Jesus said, "Feed my lambs."  16 Again Jesus said, "Simon son of John, do you truly love me?" He answered, "Yes, Lord, you know that I love you." Jesus said, "Take care of my sheep."  17 The third time he said to him, "Simon son of John, do you love me?" Peter was hurt because Jesus asked him the third time, "Do you love me?" He said, "Lord, you know all things; you know that I love you." Jesus said, "Feed my sheep.  18 I tell you the truth, when you were younger you dressed yourself and went where you wanted; but when you are old you will stretch out your hands, and someone else will dress you and lead you where you do not want to go."  19 Jesus said this to indicate the kind of death by which Peter would glorify God. Then he said to him, "Follow me!"

Peter couldn’t live up to his resolution, and it crushed him. But Jesus came and did not condemn or reject him, but reinstated him. He appeared to Peter, took him aside, cooked him breakfast, and asked him three times, “do you love me?” And when Peter answered yes, Jesus said three times, “feed my sheep.” Pastor my people. Three times Peter denied him. And three times Jesus asked him if he loved him, eliciting a “yes, Lord, you know that I love you” from Peter. The last time Peter said, “Lord, you know all things, and you know that I love you.” And so Jesus lovingly forgave and reinstated Peter as a leader among the disciples. Even though Peter could not keep his resolution, and even though he had denied knowing the Lord, Jesus forgave and restored him.

I’d like to finish by telling you a story. When I was in college, I always found myself feeling depressed and discouraged at the end of every school year. Every year, I came into the fall with high hopes of sharing the love of Jesus with the people on my floor, and every spring I looked back at failure after failure, missed opportunity after missed opportunity. I felt like I hadn’t made any difference at all. At the end of my senior year, this feeling of discouragement was worse. Here I was, leaving UConn, and what difference had I made? How many lives of my unbelieving friends had been changed by my witness? I truly felt like I had failed God.

After exams were over, most of the campus was empty, except for the seniors. One day, as I was walking across campus, I was stopped by a young woman who explained that she was with the Daily Campus, and wanted to ask me a question for Husky Talk. Now, the Daily Campus is the school newspaper, and Husky Talk is the first thing every student reads when they open up the newspaper. Husky Talk consists of one question, such as “What are you doing for spring break?” or “what’s the most embarrassing thing you’ve ever done?”, and three students give their short one sentence answers. The answers are usually weak attempts at humor and tend to be full of sexual innuendo, but every day we’d open up to the paper to see if someone we knew was in Husky Talk. In my four years I had never been interviewed for Husky Talk… until now.

I told the woman that I would be glad to answer her question, and she explained that this was for the graduation edition of the Daily Campus, which would be given to every graduating senior and every family and friend that came to graduation later that week. The question she asked me was, “Now that you are graduating, what do you hope to do with your life?” I stepped back and thought. Whatever I said was going to be read by thousands of people in a few days. What did I want to say? I thought of something funny to say, and then I thought of the truth. I knew that all I really wanted to do with my life was to serve God, to love him and to love those around me. But could I say that? Could I really put myself out there like that? I thought it over, tried to find a way out of it or something funny that would still be sort of true, but I knew what I had to say. “OK, I’ve got it,” I said. “I want to love God with all I am and love those around me.” “That’s it?” she said. “That’s it,” I said. “All right… thanks,” she said, wrote it down, and turned to leave. I walked back to my dorm, feeling very exposed, but also a nervous excitement. I felt like God was redeeming my mistakes and was giving me the opportunity to tell the whole campus that I loved him.

Well, the day of graduation came, and I went to the site where graduation would take place. The paper hadn’t come out yet, and I was so nervous that I could hardly sit still. Finally, as we were sitting in our seats, I saw some people looking through the newspaper, and I asked someone if I could borrow their paper. I opened to the middle, and looked at the Husky Talk. There was the question – “Now that you are graduating, what are you hoping to do?” Six people had been interviewed and given answers – some serious, about becoming a lawyer or working with animals, and some attempts at humor, like one guy who wanted to follow Van Halen around on tour. But as I looked over the replies, I didn’t see mine. She had left mine out. Part of me felt relief, that I hadn’t been exposed. But part of me was truly disappointed. And as I sat there thinking about it, I thought of Jesus sitting with Peter after his resurrection. Peter had felt like a failure, just like I had, and Jesus had asked him, do you love me? And Peter had replied from his heart, “Lord, you know I love you.” And I realized what had happened.  That interview wasn’t for other people to hear. It was for me to hear. In the midst of my failure, the Lord had asked me, “Eric, do you love me?” And in doing that he had revealed my heart. I did love him. I do love him. And I will always love him.

We have all sinned and fallen short, not only of our resolutions but of God’s holy standards. But in Jesus’ life, death, and resurrection, he has taken our sin and we have received His righteousness. We have the A+. We have met our marks.

He has already covered all of our sins. Now go and follow Him. Walk into this new year in faith and confidence. Love His people without fear and without guilt.