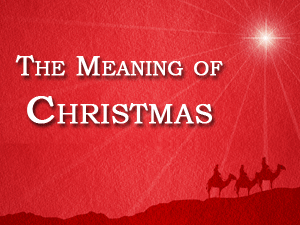 Series: The Meaning of Christmas

Christmas may be over, but tomorrow is the holiday known as Epiphany, or three kings day, which remembers the visit of the Magi to Jesus and celebrates the incarnation, God becoming flesh in the person of Jesus. Let’s read Matthew 2:1-12, the story of the visit of the Magi, and see what this has to teach us.

Matthew 2:1-12 - After Jesus was born in Bethlehem in Judea, during the time of King Herod, Magi from the east came to Jerusalem  2 and asked, "Where is the one who has been born king of the Jews? We saw his star in the east and have come to worship him."  3 When King Herod heard this he was disturbed, and all Jerusalem with him.  4 When he had called together all the people's chief priests and teachers of the law, he asked them where the Christ was to be born.  5 "In Bethlehem in Judea," they replied, "for this is what the prophet has written:  6 "'But you, Bethlehem, in the land of Judah, are by no means least among the rulers of Judah; for out of you will come a ruler who will be the shepherd of my people Israel.'"  7 Then Herod called the Magi secretly and found out from them the exact time the star had appeared.  8 He sent them to Bethlehem and said, "Go and make a careful search for the child. As soon as you find him, report to me, so that I too may go and worship him."  9 After they had heard the king, they went on their way, and the star they had seen in the east went ahead of them until it stopped over the place where the child was.  10 When they saw the star, they were overjoyed.  11 On coming to the house, they saw the child with his mother Mary, and they bowed down and worshiped him. Then they opened their treasures and presented him with gifts of gold and of incense and of myrrh.  12 And having been warned in a dream not to go back to Herod, they returned to their country by another route.

Now, the traditional way the story is told is that three kings or wise men come, following a star to Bethlehem, where they join the shepherds at the manger to worship the baby Jesus. But if you read closely, you see how many of those elements are just not in the Bible story:

They were not kings – Magi is the Greek word for astrologers, magicians, interpreters of dreams.

There were not three – they just bring three gifts, but there were likely more magi

They didn’t follow the star to Bethlehem but to Jerusalem

They didn’t meet Jesus in a stable – they are in a house, weeks or months after his birth.

The background of this passage, according to historians, is that there was a conjunction of Saturn and Jupiter around the time of Jesus’ birth. Jupiter was the royal planet, and Saturn represented the Jews. As a result, there was a rumor that a great king would come out of Judea. And so when Saturn and Jupiter were aligned, the magi went to Jerusalem to look for this great king. But the fact that Matthew includes this story is fascinating.

Let me share four things we learn from this passage:

It’s easy to overlook the fact that Jesus’ birth was celebrated by shepherds and astrologers. Neither was considered clean or of good reputation. Everywhere else in the Bible, magicians are given a negative interpretation. But God chooses them to be among those who celebrate the birth of Jesus? No Christian writer would have made this up.

All throughout the birth narratives and his life, it is clear that Jesus came for the outsiders. Look at his genealogy – Tamar, Rahab, Ruth, the wife of Uriah (Bathsheba) - this is who Jesus came for.

The outsiders celebrated his birth, while the religious elites missed him. This is good news for those who feel like outsiders. Do you have a story like this?

Jesus came for outsiders. Listen to how Jesus himself puts it:

Mark 2:15-17 - While Jesus was having dinner at Levi's house, many tax collectors and "sinners" were eating with him and his disciples, for there were many who followed him.  16 When the teachers of the law who were Pharisees saw him eating with the "sinners" and tax collectors, they asked his disciples: "Why does he eat with tax collectors and 'sinners'?"  17 On hearing this, Jesus said to them, "It is not the healthy who need a doctor, but the sick. I have not come to call the righteous, but sinners."

This reality should give pause to Christians who think they have a right to keep people out of God’s church or declare who is and who is not acceptable to God.

Matthew 23:13 - "Woe to you, teachers of the law and Pharisees, you hypocrites! You shut the kingdom of heaven in men's faces. You yourselves do not enter, nor will you let those enter who are trying to.

But magic is a sin! And yet God brings them to the birth of His son. But the shepherds are unclean! And yet God invites them as well. We need to wrestle with this, and we need to be very careful that we do not walk in the footsteps of the Pharisees. We would be wise to err on the side of welcoming and listening and loving. God has a tendency to welcome and use people that religious people would not expect.

The magi use their astrology and follow the star to Jerusalem. They know a great king is going to be born. But it isn’t until someone reads Micah 5:2 to them that they know the baby will be born in Bethlehem. General revelation gets them so far. But they need special revelation to get them to Jesus.

There is a lot of wisdom in this world. God has given general revelation to humanity. You can learn some great things through science, through philosophy. Politics and education can make a difference. But they won’t bring you to Jesus.

General revelation and worldly wisdom will only get you so far. Think about evangelism. You can help people see that Christianity is a reasonable faith. You can show them why the resurrection is historically likely. You can give them evidence for God. But you can not convert someone on arguments alone. God must reveal Himself to them.

Psychology can help you understand why you are the way you are. It can help you make sense of the pain in your past and how it has affected you. But psychology can not give you the power to forgive. It can not assure your heart that you are loved. It can give me strategies for dealing with my anxiety. But only special revelation in God’s Word and by His Spirit can teach me that God works all things together for good, so I can rest in His sovereignty.

Motivational speaking and inspiring stories can help you to live your life to the fullest. But only special revelation helps me to not fear death and to know that I have eternal life.

The wisdom of the world can only get you so far. Politicians can lay out policies and pass bills to help move society towards a just and righteous society. But they can not change hearts. They can not make the rich want to share with the poor. They can not heal those in poverty of the wounds in their heart. They can not meet the need for significance inside a human heart that causes people to compare themselves to others and look down on people of other races or socioeconomic statuses in order to make themselves feel better.

7 Then Herod called the Magi secretly and found out from them the exact time the star had appeared.  8 He sent them to Bethlehem and said, "Go and make a careful search for the child. As soon as you find him, report to me, so that I too may go and worship him."

Upon hearing about the birth of the king, Herod is feeling threatened. After the magi don’t return to him, he orders that all boys two years and under in the vicinity of Bethlehem to be killed.

But Jesus is a whole other kind of king, who does not operate according to the wisdom and power of the world. He will become king by love, by suffering, and by dying. We serve a king who reigns over a kingdom that is not of this world.

Philippians 2:5-11 - Your attitude should be the same as that of Christ Jesus:  6 Who, being in very nature God, did not consider equality with God something to be grasped,  7 but made himself nothing, taking the very nature of a servant, being made in human likeness.  8 And being found in appearance as a man, he humbled himself and became obedient to death-- even death on a cross!  9 Therefore God exalted him to the highest place and gave him the name that is above every name,  10 that at the name of Jesus every knee should bow, in heaven and on earth and under the earth,  11 and every tongue confess that Jesus Christ is Lord, to the glory of God the Father.

Keep this in mind this year. Whether you support Trump, Biden, Warren, Sanders, or someone else, do not confuse Jesus with political parties and leaders. Jesus is holy and calls all men to account, to bow the knee to Him.

Isaiah 9:6-7 - For to us a child is born, to us a son is given, and the government will be on his shoulders. And he will be called Wonderful Counselor, Mighty God, Everlasting Father, Prince of Peace.  7 Of the increase of his government and peace there will be no end. He will reign on David's throne and over his kingdom, establishing and upholding it with justice and righteousness from that time on and forever. The zeal of the LORD Almighty will accomplish this.

This is our King. Let us bow down and worship Him today.